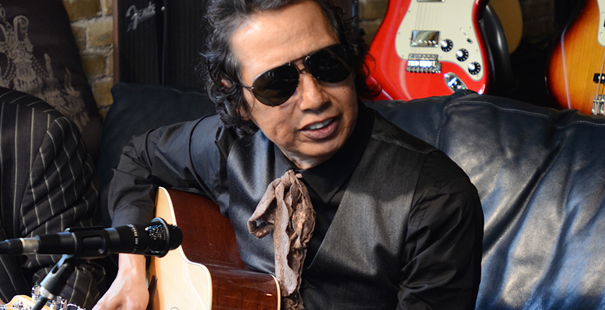 With Big Station, Escovedo sticks with his brand of dusty rock and roll informed by punk sensibilities, but there is less of a focus on riffs than the rhythm.

Obviously, Escovedo and his band, The Sensitive Boys, are attempting to get the live audiences moving.

Guild recently caught up with the Texas native to talk about his career and what might be on the horizon.

Guild: What can you tell us about the recording process with Big Station?

AE: We recorded it in nine days.  We recorded at Jim Eno’s studio, you know, the guy from Spoon.  He’s got a great studio in Austin called Public Hi-Fi. Tony Visconti produced again, our third with Tony and second one on Concord Records.  We really wanted to do something different.  This album is centered more around rhythm, and as far as subject matter, I guess you could say that it’s more of an observation of something that’s happening around us instead of something internal. 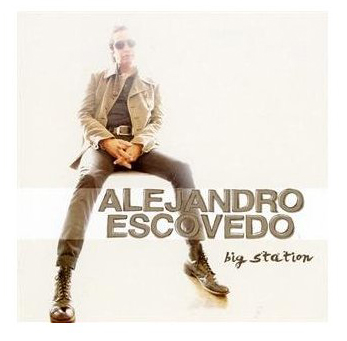 Guild: What are some of the themes behind the songs on the record?

AE: There are songs like “Sally was a Cop,” which is about a young lady that’s really just trying to help people.  She’s in Mexico, you know, but ends up being a soldier because of the horrific things that are happening down there.

We’ve got another one called “Man of the World,” which is a song kind of about sitting at the bottom of the world, about working very hard and observing the world from a place that’s not necessarily reflective of the work you’ve done in your life.

We’ve got things like that. Not that heavy, really. There’s a lot of good rock and roll songs.  But it’s funny, we worked a lot with rhythms and samples, drum machines and 808s.  Things like that.

Guild: We read an interview in the San Antonio Express-News where you mentioned that you’re “sick of guitars.” How is that?

AE: I love guitars, obviously.  I don’t think you can get sick of guitars. It’s interesting to note, I was watching a lot of the younger bands during the South by Southwest festival in March, and you don’t see a lot of guitar rock and roll bands, two-guitar bands anymore.  That’s what David [Pulkingham of The Sensitive Boys] and I do really well together.  Maybe it’s kind of dated, I guess, but the way we’re trying to present it is in a more contemporary, modern way. I don’t think they’ll ever die, but there is a need for more guitar-driven rock and roll.  Metal is always going to have guitars, that fusion-y jazz will have guitars, but that good-old Stones, Faces stuff is hard to find.

Guild: How did you get into playing music?

I wanted to be a filmmaker.  The way I got into music was I wanted to make a film about the worst band in the world, loosely based on the Stooges.  Me and my friends, we couldn’t play, but we looked very cool – we thought, anyway.  So we decided we would be the band. We couldn’t play, but I knew an E chord and a D chord.  I learned an A chord, and we wrote our first song.  For the filming, we played, and it was horrible, of course, but it was fun.  And then punk rock came at the same time. Punk rock wasn’t about being a technical player.  It was about expression, right?  So we fit right in.  Somehow, we just fit into that thing, and that began my musical career, 35 years ago.

Guild: From there, how did you get into rock and roll?

AE: I come from a family of musicians.  I come from 12 children.  My older bothers are all Latin musicians.  They’ve played with Santana, Mongo Santamaria, Cal Tjader, Willie Bobo, Boz Scaggs.  And my niece is Sheila E, who played with Prince and everybody.  They’re al doing great.  And then beginning with me and my two younger brothers, we’re all rockers. We fell in love with English rock and roll.  Not only the Stones, but the Pretty Things, the Yardbirds, the Dolls and the Stooges.  Guitars were always what drove me.  Guitars were always cool because Roy Rogers played a guitar, Gene Autry and all those cowboys.  Growing up in San Antonio, I’d go see them at the rodeos.  And then, my father was a mariachi, so guitars were everywhere.  Lots of bajo quintos, bajo sextos.  I’ve always been around guitars, even though a large part of my family is percussionist.  It’s interesting, because I’ve become kind of the curator of our family legacy, so I write a lot about my family.  And now, I’ve played with my brothers together in bands, and it’s all because of guitars.  I really didn’t start until I was 24 years old.  I didn’t write my first song until I was 30.  So it was a slow climb for me, I guess.  A late bloomer, as they say.

Guild: Why did you want to focus on making a more danceable album?

AE: That was really important for me because we had made so many records that were very reflective.  It was really kind of listening-room albums, where I’d go in with cellos, strings, and I’d have string quartets.  Starting with Real Animal, a real autobiographical rock and roll album, I noticed that people were starting to move with my songs. And we were doing a lot of residencies at the Continental Club, where people like to dance. So, it was real important to get the audience dancing.  I always felt like that was an element in my music that I hadn’t explored and hadn’t fine-tuned. With this album, I think people will find more rhythmic beats and rhythms they can dance to.  In fact, I’ve already seen it as a result of the new songs.

Guild: And your first all-Spanish song is on this album, too?

AE: I did a song called “Sabor a Mi,” which is a traditional song written in 1951.  It’s a very classic standard, kind of like if you did “Stardust” or something.  It’s been done by all sorts of groups.  Vicki Carr had a huge hit with it.  Everyone’s done it. Los Lobos did a great version of it.  And we did kind of a techno, ambient version of it.  I’m really happy with it.  I’m really happy with the response, and maybe there will be an all-Spanish album in the future.

Guild: Is it true that you’re putting together an autobiography?

AE: I am writing an autobiography with my friends Dave Marsh and Daniel Wolf. And I’ve also begun a coffee-table, photography book filled with observations and lyrics and old stuff that I’ve written.  I used to write a lot of film treatments, so I’m putting some of that stuff in there.  All of this is in a two-year span.  I’m writing two records, and one of them is going to be more about the music and what inspires me in music.  The second album is going to be all the soundtrack stuff that I’ve done.

Guild: As you start telling stories and reminiscing for the autobiography, there must be some memories that really stand out. Can you share a few?

AE: I’ve had so many.  I’ve been so fortunate, really. I’m not a guy that sells a lot of records, but I’ve had the admiration of people that I’ve admired.  When I was ill, 32 artists did my music – everyone from Steve Earle, the Jayhawks, Benny Kay, John Cale, Ian Hunter, John Dee Graham, my brothers, it just goes on and on.  It was a beautiful thing.  That was probably, as a songwriter, a highlight for me, because nobody had ever recorded my music before.  The thing that was really beautiful about the record was you could hear the love in the music.  And it taught me a lot about my songs and songwriting. I really enjoyed that.

Once, in the True Believers, we played the Club Lingerie, and our record was just about to be released.  We’d always do a version of “I Wanna Be Your Dog” by the Stooges, and I look out in the audience and Iggy Pop is dancing to our music.  That was a high.  We were partying, but had to get on a plane that night, a really late flight to fly to the first gig.  As we get into the car that they hired for us to get to the airport, the guy turns on the radio and our song was playing on the radio at that very moment.   That was the beginning of a good time.

I’ve had a lot of moments like that. Playing with Bruce (Springsteen) in Houston, that was awesome.  Those kinds of things are what really matters to me.  I’m very grateful for that.

Guild: At this year’s South By Southwest music festival, you opened for Springsteen at the ACL Moody Theater and then joined him later onstage during his set. There were many standout collaborations that night, but which were your favorites?

Escovedo: The two collaborations I enjoyed the most were Jimmy Cliff – who is singing better than ever… I’ve always loved him – and Eric Burdon doing “We Gotta Get Out of This Place” was pretty awesome.  Bruce [Springsteen] had spoken about him at the [SXSW] commencement speech, about The Animals and what they meant to him. To have him come up and sing was pretty amazing.