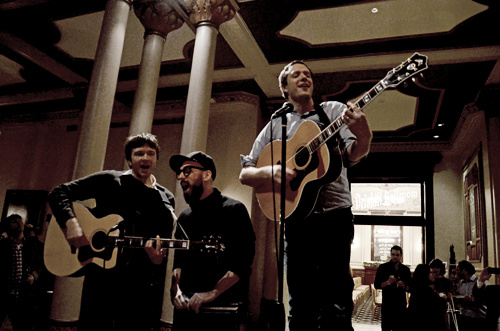 The “When the Hell Do You Sleep” panel was not an official part of the South by Southwest interactive festival, but it featured some heavy-hitting executives and drew a packed house. OK Go singer Damian Kulash joined Venture capitalists Aileen Lee and Bing Gordon, Ian Askwith of Lucas Film,Warner Bros. Records COO Livia Tortella and IDEO Chief Creative Officer Paul Bennett for a Q&A session hosted by Goodby Silverstein’s co-founder Jeff Goodby.

Following the panel, the band performed a pair of songs with some help from their Guild guitars. Never known for being run of the mill, Kulash, bassist Tim Nordwind and guitarist Andy Ross stood on chairs in the middle of the hotel ballroom so that they could be seen and heard in the crowd. After fighting against the room’s ambient noise level on the first song, Kulash gave the audience some sing-a-long instructions for “This Too Shall Pass.”

Nordwind will be playing several more shows this week at the SXSW music festival with his side project Pyramids, featuring He Say/She Say’s Drea Smith. Check them out here. 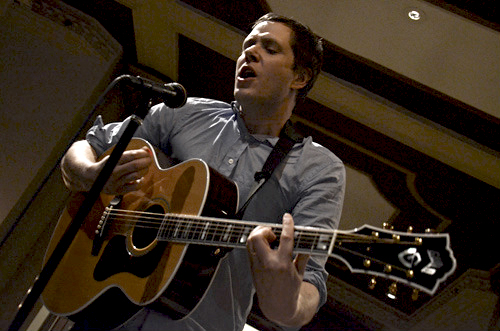