Nashville-based, Georgia-bred singer/songwriter Lera Lynn took the stage at the Mercy Lounge Thursday night for the Americana Music Festival and charmed an enthusiastic crowd with selections from her entire catalog.

That includes her debut album Have You Met Lera Lynn?, EP Lying in the Sun and her upcoming full-length The Avenues, all of which feature introspective heartbreakers and impeccable storytelling.

Lynn cut an elegant figure in a black dress with a lace bodice, accented throughout most of her set by a deep red Guild Starfire.

Lynn’s sultry voice pulls the audience towards the stage with every word, especially when she went into “Bobby, Baby” three songs in.  The track is a delicate one that tells the tale of a man who killed his own brother and then tried to hold his life together.

That was followed by “Coming Down,” which Lynn has said is a reflection of her troubled relationship with an alcoholic father, who died when she was in her 20s.

Lynn added a little levity to the situation with a special cover of “Fire,” which is featured on  Lying in the Sun.

Surely, the “Boss” is cool incarnate, and Lynn’s icy vocals were highlighted on the impassioned love song.

Before playing that one, Lynn asked the crowd, “You f**king love us, right?!” 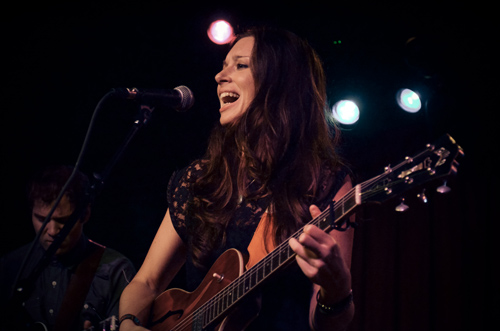