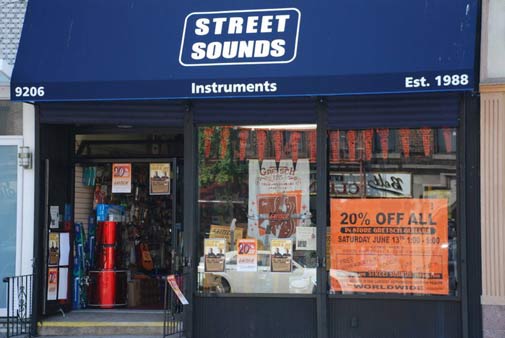 What once started as a compact disc store nestled in the streets of Brooklyn has now been transformed into one of the most sought-after music shops in the country.

Rocky Schiano, owner of Street Sounds, has been in business since 1988. He and his father, Ralph, started selling CDs until they slowly started bringing in guitars, eventually making a complete turnover.

Located in the Bay Ridge neighborhood in Brooklyn, N.Y., Street Sounds prides itself on carrying the finest quality instruments, and the store’s collection could not be complete without Guild guitars. It has a wide inventory of Guild guitars and has been the largest independent Guild dealer in the United States for the past three years.

Although most of Street Sounds’ sales are done through its website, Guild fanatics nationwide travel far and wide to visit the popular store. The majority of its clientele consists of mature, experienced players who are highly educated about guitars, but the selection there caters to novice and veteran guitarists alike.

Street Sounds does very well with its Guild selection, particularly with D-55 and F-512 models. And aside from its envious inventory, the success of Schiano’s business is founded on the exceptional service he delivers.

“We make it very easy for someone to be comfortable purchasing a guitar, which is a very important part in dealing Guild,” he said. “Each guitar has its own tone and feel, and we want customers to be very confident during their purchase.”