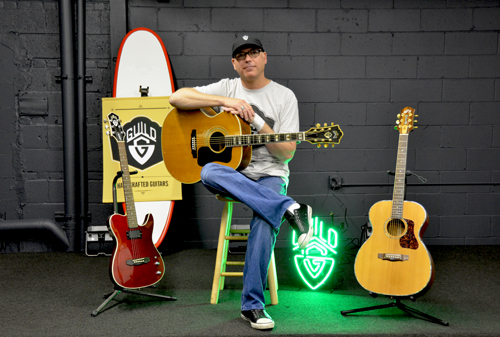 "I've been loving and selling Guilds for over 40 years and collecting a few as I go along,” said Ash. “These are a few of my rarities.”

Sam Ash Music Corp. COO Sammy Ash has been with the company for more than 40 years and said customers can’t go wrong shopping at his stores.

“We do the right thing every time.  Sometimes, things fall through the cracks, but we always make it right,” he said. “After all, the family’s name is on the door.”

From sweeping floors to upper management, Ash has served in nearly every capacity at the company bearing his name, and he now oversees all the physical aspects of every Sam Ash location and a large distribution center in Tampa, Fla.

The chain’s successful growth can be attributed to the Ash family’s professional service, astute business acumen and unparalleled assortment of products.

“We have a great selection,” Ash said. “We also have great sales associates, and all of our acoustic instruments are in humidified environments. Plus, our pricing is good, if not better than anyone else’s.”

Part of Sam Ash Music’s fine selection includes Guild guitars, of which Ash is a connoisseur.

“I’m a Guild guy,” he said. “I grew up with Guild, and I’ve always had one. I know almost every model that has ever existed. Since I am in charge of the used buying for the company, every once in a while even I get stumped and have to do a look-up.”

Throughout the years, Guild guitars have been hot products at Sam Ash Music.

And it seems that sales won’t be slowing any time soon. Ash plans to expand the business by opening stores in new cities and states previously unoccupied by the Ash empire.

“I know where I would like to see Sam Ash music stores,” Ash said. “Where we are looking, I am not at liberty to say, but I think some of them might surprise a lot of people.