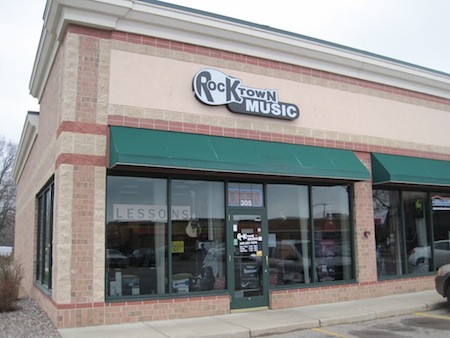 No other music store will rock your world like Rocktown Music in St. Cloud, Minn.

Founded in 2009, the 2,400-square-foot guitar haven carries more than 400 acoustic and electric guitars, making it the perfect destination for rockers and acoustic players alike.

“We have a great, serious guitar selection,” he said. “Although we carry drums, pianos and band instruments, we decided to specialize in guitars.”

A full-fledged guitar player and collector, Knutson has a strong penchant for the instrument that’s especially noticeable when he’s talking about Guild.

“I love Guild guitars; they’re the best thing for the buck,” he said. “They’re lifelong instruments, and some of the oldest models around out-perform new guitars from other brands.”

Knutson boasts a personal Guild collection of more than 15 distinctive models, including a 1969 F-212, a 1972 D-25 and a rare four-string CE-100. His collection is so fine, in fact, that Mark Dronge, son of Guild founder Al Dronge, personally inquired about a few of the models.

“I’ve got so many Guilds that Mark called me to ask about a specific model in my collection,” Knutson said. “I have so many that it’s hard for me to even remember what I have.”

Knutson’s preference for Guild is apparent on entering Rocktown. He has devoted an entire wall to the brand and made it his store’s main acoustic guitar line.

So if you’re a Guild fanatic looking for Guild guitars sold by a true Guild connoisseur, your best bet in the upper Midwest is Rocktown Music.