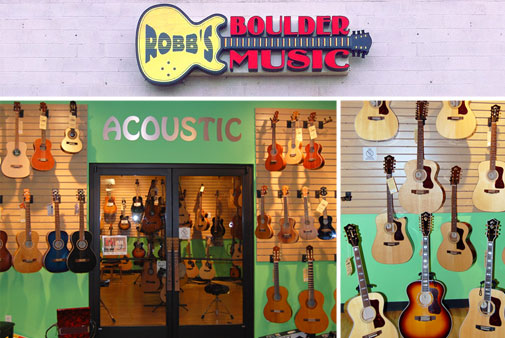 Robb’s Boulder Music in Boulder, Colo., holds a special place in the community, and it’s been that way since it was established in 1978.

Founder William “Robb” Candler opened the shop in the once-vacant box office of the historical Boulder Theater. After the business grew, Candler moved it to several locations across town, and sold the shop to current owner Seth Goodman before retiring in 2007.

Robb’s Boulder Music is now thriving in its current Steel Yard neighborhood location, where it serves hundreds of loyal customers seeking a vast selection of high-quality instruments. And since high quality is their specialty, so is Guild.

Store manager and Guild aficionado Mark Arroyo is an experienced guitar connoisseur with over 30 years of experience.

“As a bit of a studier and someone who grew up around guitars, I can say Guild is probably the only American company that’s never really seen a significant slip in quality,” he said. “It never seems like Guild had a drop-off in quality, and that is the general consensus across the board.”

He is also the proud owner of two vintage Guild electric guitars, a 1964 Guild Starfire IV and a 1966 Starfire III. Arroyo knows Guild guitars are built to last.

“Over time, Guild guitars don’t get taken down nearly to the level that other competitors’ products do,” he said. “Oftentimes, Guilds are built a little heavier than other manufacturers’ products, and they handle the Colorado climate better.”

Robb’s Boulder Music does very well with acoustic guitar sales, which can be attributed in part to Colorado’s booming bluegrass scene. Some of the more popular Guild guitars sought by customers are the D-55, F-47, F-412 and F-212 models.

Arroyo hopes to add a Guild F-30 to his personal collection and to the shop’s inventory.

“We have a lot of customers that will associate instruments with certain artists,” he said. “By having an educated crowd as far as clientele goes, people will see the F-30 and think of Mississippi John Hurt, or say ‘Hey! Richie Havens opened Woodstock on a Guild guitar!’”

Robb’s Boulder Music has received many accolades over the years, and was recently named one of NAMM’S top 100 U.S. retailers.