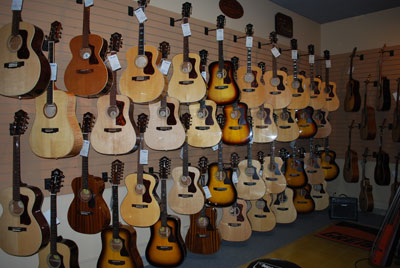 For 35 years now, a major home for Guild in eastern Canada is Montreal’s Diplomate Musique, a small boutique retailer where father/son proprietors Franco and Steve Amante offer the best in high-end instruments to the most discerning musicians in a vast metro area of more than 4 million people. And when it comes to acoustic guitars, high-end means Guild.

The Amantes cater to a more specific clientele than that of the giant chain retailers. A small number of customers are beginners and novice players, true, but more often those who come through Diplomate Musique’s doors are experienced players who are already quite serious about acoustic guitars. Over more than three decades, the Amantes have earned a reputation for exemplary service among these seasoned players.

They’ve also earned an enviable reputation for offering a fine selection. Situated in the heart of central Montreal on Rue Beaubien East, Diplomate Musique has at any given time a large and nicely varied range of Guild guitars right there on the premises.

“We’re one of the biggest Guild dealers in Montreal,” Steve Amante said. “We have over 40 guitars in stock, on the wall. It’s our main line for high-end acoustics. The first time people come in, it’s the first thing I suggest.” 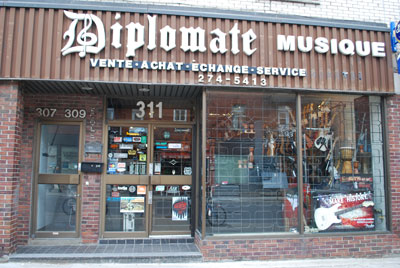 Diplomate Musique opened in 1972 and began carrying Guild guitars shortly thereafter. Franco Amante became a manager there in 1979; he took over operation of the store in 1987 after the original owners announced their intention to close down and sell. Steve Amante worked in the store part time while he was in school during that era, going full-time in the early 1990s.

Guild guitars were there all along, and Steve Amante understands why they appeal to his customers so much.

“I find that overall, they’re very solidly made; well balanced in sound,” he said. “They project well and they don’t sound metallic—they’re very smooth. Guild is known for that smooth, mellow tone.”